As you traverse the Patapat bridge you pass the Mabugabog Falls that is the water power for the mini hydroelectric plant. When its been very wet and raining the falls are spectacular to watch 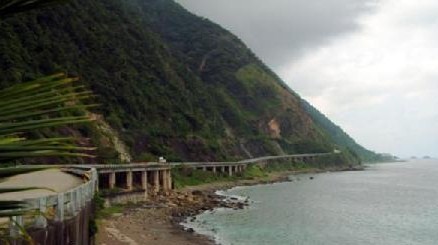 When you stop at Patapat for your photo shoot look upwards and on the cliff face you can still see the etched footbridge that was the only precarious link between Ilocos and Cagayan Valley up until the 1960's.

The Patapat bridge also offers great views of Pasaleng Bay. Below the waters lies a shipwreck dating back to the Japanese occupation. They say half of the ship lies in eight fathoms in Pasaleng Bay, and the other half at 20 fathoms in Agua Grande. The divers love the wreck.

It is also the home of the Kalbario Natural Park which is a declared as protected area by the DENR. The park area comprises 3,800 hectares of forested and rocky lands with no trails.

Your kickoff point to Patapat is Pagudpud. Pagudpud or Pagudpod as its from time to time called is rather delightful one day and perfect the next. Some say it's the Boracay of the North, but we correct them and say it is Boracay as it once was! And that's why it's so popular. It is Boracay as it was 25 years ago! The spotless white sands of Saud Beach are located at Pagudpud.

The drowsy rural coastal district village of Pagudpud is located on the most Northern extremity of Luzon, and is about 50 miles (80 kms) up the coast from Laoag City, the capital of Ilocos Norte province. It is also approximately 350 miles north of Manila, you might drive, catch a bus or take a flight to Laoag City.

The area is situated to just the north of Bangui and its now renowned Bangui windmills and inland lies the monumental Cordillera Mountain Range, which is the largest mountain range in the Philippines. Just across the other side of this mountain range lies the province of Cagayan. To the North and the West are the blue and warm waters of the South China Sea, great for a swim.

Like all best kept secrets like Patapat, the foreign tourists are now becoming greatly interested, and visitors from America, Europe, Asia and elsewhere are making the trip. One of Australia's most respected and foremost international travel writers rated Saud Beach as Number 1 on the list of the Top Ten best Asian Beaches. so we would suggest that you discover Pagudpud before all the other tourists find out.

It is no wonder that so many movies and television commercials are filmed here. Also its popular with fashion magazine photo shoots and a great idyllic honeymoon destination. Try and envisage a beach without too many tourists, no noisy jet skis, no strip of bars and not even a McDonalds restaurant! Utopia? almost!

Pagudpud is located amongst leafy verdant mountains, luxuriant valleys, rolling hills and flat coastal plains. The 20,000 or so locals who dwell in Pagudpud and the surrounding area subsist on rice framing, fishing and so on. The fresh fish and lobsters are delicious and inexpensive here and more recently tourism is increasing.

Because Pagudpud is so uncommercialized there are limited places to stay and you need to book well ahead. Book your room online at Tartaruga's Hotel when you visit Patapat Viaduct.