The empanada is a signature food of Ilocos Norte, in particular Batac. What makes them all so different, well I am about to explain all that to you. The name Empanada is derived from Spanish word meaning to wrap and coat in bread and this is the most popular street fare in Ilocos Norte and is among the best meriendas in Ilocos Norte. I just love them.

This crispy thin shell is filled with longanisa, bean sprouts and egg. The Batac version differs from the Vigan due to both color and thickness. For an original empanada you need to eat one from Glory’s, said to have started the whole trend and included her favorite color, which is the now famous orange, where the rice flour based shell is colored using achuete.

The average empanada price starts at around P35 but current prices are unknown. Frying only takes a few minutes, just enough to cook the shell and to enjoy them you really need to eat them immediately straight from the frying pan while hot. Also you need the local sukang iloko to enjoy your empanada with. There are those who prefer their empanada it with ketchup, hopefully from local tomatoes. The Batac empanada also has young papaya as one of its main fillings and the orange colored rice flour shell.

The empanada dough is then sealed and then deep fried. For the uninitiated, longganisang Ilocos is very different from that found in down Manila. 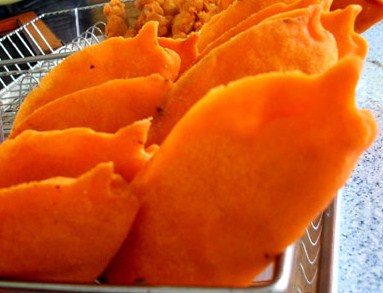 They are much smaller and are not sweet and they taste of the famous Ilocos White garlic which is full of rich flavour and that’s what makes them so full of flavour. I have heard the term used such as culinary genius that only Ilocanos are capable of.

The Laoag empanadita has cabbage filing instead of papaya and a rice flour crust. There are some Laoag empanada makers that do use papaya. Both have egg, monggo and longganisa and there is also the sweet longganisa variation.

There standard Batac empanada has papaya, bean sprouts and egg; then there is ordinary eggless which just has the vegetables. Then there is the special empanada version made with longaniza and egg. The double special has double longaniza and one egg

The Batac empanada uses the whole egg and in Vigan they generally remove the egg white. The Longaniza types are also quite different, and the Batac delicacy uses the saltier Laoag longaniza while the Vigan one has the vinegar seasoned longaniza of Vigan.

Many Vigan ones also do not have bean sprouts, and just the grated green papaya. The differences in vinegar also add taste changes between the two.

The Vigan vinegar is very strong with an alcohol-like fermented taste while Laoag vinegar is really sour. In Vigan they still use banana leaves to fold and seal them while in Batac and Laoag they use plastic and paper.

Find out more about Pagudpud Ilcos and all you need to know about the Empanada and Laoag Food.